How to Cook a Live Crab

Make sure that your crab is still alive before cooking it. When a crab dies bacteria will quickly destroy the meat so it is important to either cook the crab while it is still alive or immediately after it has died.

A crab that has limp claws or whose antennae isn’t twitching when you pick it up is close to death and should be cooked immediately. 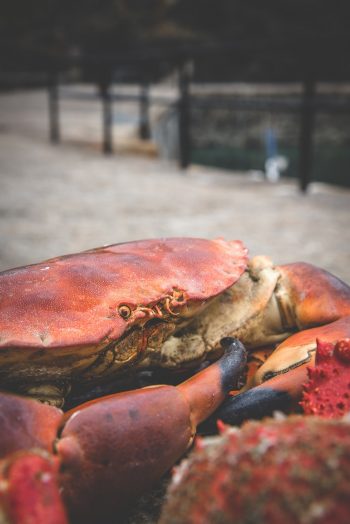 Getting your crab in advance

It is possible to get a crab in advance of a special occasion but we would advise cooking it when you get it and then keeping the cooked crab in the fridge until it is required.

A cooked crab can be kept in the fridge for a couple of days.

Nobody likes the thought of killing something and many people, including chefs, do not like cooking live crabs.  While commercial shellfish processors are now required to use a stun gun to kill shellfish, this is not the case for domestic consumers.

The current guidance by Seafish, working alongside the Shellfish Association of Great Britain (SAGB) and the Crab and Lobster Management Group (CMG) is as follows:

“In terms of despatch at home by consumers, current advice is that crab should not be boiled alive (either by placing in cold water which is raised to a boil or already boiling water). Instead they should be put in the freezer for 30-60 minutes, before being placed immediately into boiling water” – Seafish UK 03.08.22

We will monitor this and change the advice should anything change.

When your crab is cooked, remove it from the water and leave it to cool.