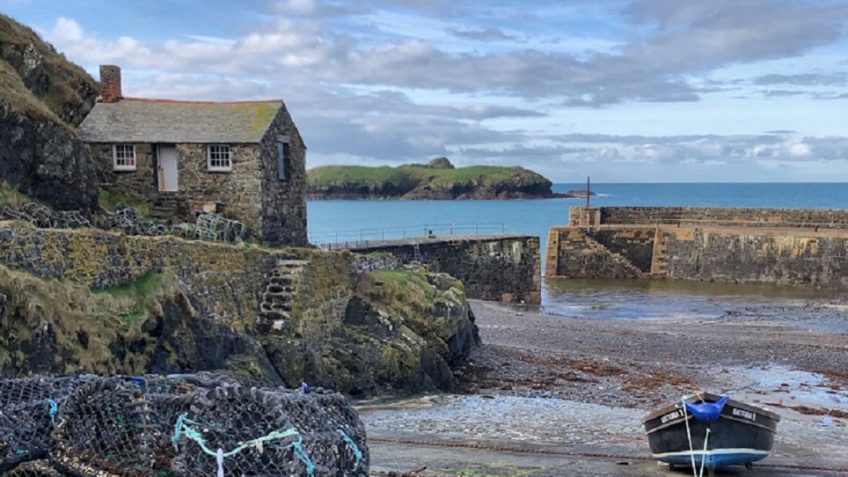 Let’s be honest, it’s difficult to take a bad picture of the net loft so it’s easy to see why.

The little net loft, also known as the Fishermen’s Cottage down the cove oozes charm and history but who built it and why is it situated on the edge of the harbour?

Most of the romantics amongst us can visualise a charming scene from years gone by – probably with curtains and flowers in the windows and Mother sitting on the door step sewing while the children play on the beach below. How amazing would it be to recreate that image today?

The reality is actually quite different….

The History of the Net Loft

Our ‘Then and Now’ image on the left (and who doesn’t love a then and now?!) gives a much better indication of the purpose of this building. The former pic taken in approximately 1925 shows that the cove was primarily used for fishing.

Our comparison photos are 93 years apart and yet the litte net loft hasn’t really changed at all. If a ‘Then and Now’ image had been created in 1925 and showed the cove 93 years before that, you would see a very different building – one that was very much wider!

This can be seen clearly in this wonderful 19th century photograph which was taken before the harbour walls were constructed in the 1890s. In order to create a walkway to the east pier, the net loft was reduced in size.

But why was it built there in the first place?

From knowledge handed down through several generations, it is believed that the net loft was built in the late 1770s – this was at around the same time that the pilchard fishing industry was starting to really expand and in 1783 the fishermen of the cove applied to the owners of Lanhydrock House (who controlled the land at that time) to develop the cove into an inshore pilchard fishery, known as a seine fishery.

Pilchard fishing was a huge part of the history of Mullion Cove and deserves to have a blog of it’s own in the future and this is definitely on the ‘to do’ list.

But for now, let me explain what pilchard fishing has to do with the little cottage down the cove.

The Net Loft’s role in the Pilchard Fishing Industry

Pilchard fishing was carried out in seine boats using large fishing nets. These boats can be seen in the old photo above and these, along with the nets were valuable assets and in comparative terms, these days a similar set up could cost £500k and needed looking after!

The net loft was exactly what is says on the tin…. the nets would be stored in the building and when it was time to go fishing, the seine boats would be launched and would stop on the slip next to the net loft. The nets would then be transferred from the building through the large doors on to the waiting boat using a roller on the outside of the building. This would have been a slick operation and makes perfect sense of the positioning of this litte building.

But why does it have a chimney?

Fishermen would come from the villages on the east coast of the Lizard such as St Keverne and Cadgwith to fish the seine boats from Mullion Cove – the reason for this will be explained more fully in our upcoming blog.

These villages are only a few minutes drive away these days (road works and cows permitting) but in the 18th Century they would have been a huge trek away – therefore the fishermen would sleep on top of the nets in the net loft.

Even though I’m sure these people were much hardier than we are today, they would still need to eat and keep warm, hence the inglenook fireplace. Pretty sure there would have been a bunny stew or two in a pot on the fire!

So the net loft wasn’t a quaint little cottage at all, but a functional building extensively used for over 100 years in a time when Mullion Cove was part of a thriving pilchard fishing industry – an industry that came to an end in the latter part of the 19th Century, not that long after the harbour walls were constructed, and probably why it was felt that the building could be reduced in size to make way for the harbour development.

The net loft is still in use today as a store for fishing equipment.

The great news for all of us who love this little building is that it gained Grade II Listed status in 1984 and, for those of you who like to look up these things, it is listed as a “harbour cottage” (List Entry Number 1328501)

Hopefully this means that, having served it’s time as a critical part of the Cove’s pilchard industry and without doubt, having survived many horrendous storms prior to the harbour being built, it will now be taken care of for many future generations to come and photograph. 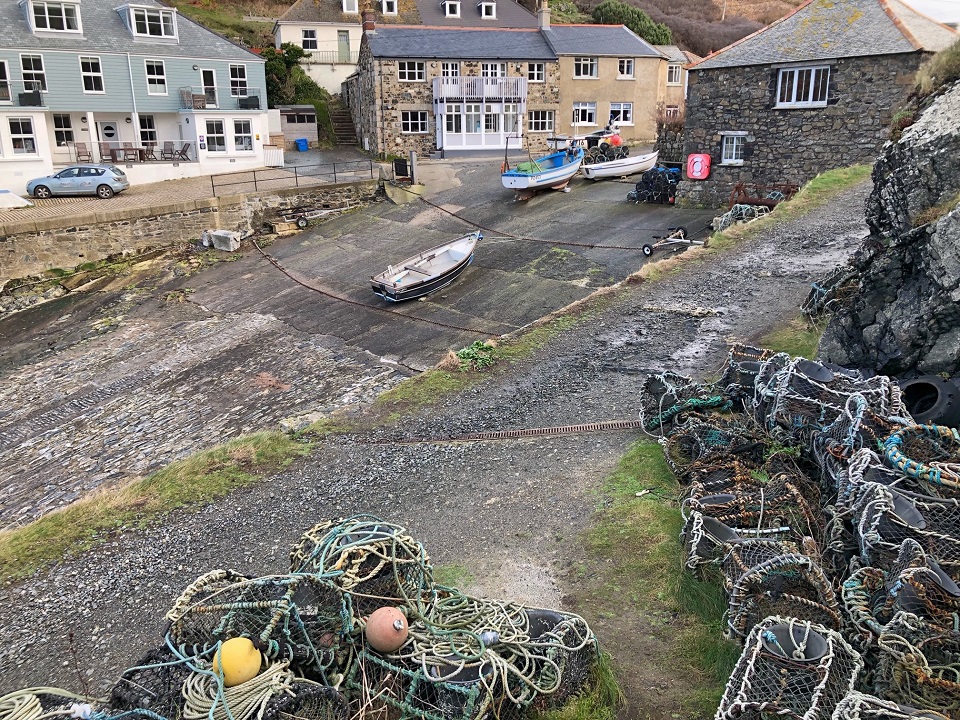 If you’ve ever wondered what you would now see if you could recreate our romantic image and sit on the front door step, it would be this!